Recently, things haven’t really been going my way. I have been a bit down because I have been unable to have closure to my school year and the beginning of my summer. I had figured my house would sell quickly and it hasn’t. Dropped prices. Nothing. I thought I’d have a job back in Virginia, and I’m still waiting on that to finalize. I feel guardedly optimistic on the job. I took up a couple weeks off from teaching yoga because my cup was empty and I needed to spend Lauren’s graduation week compartmentalizing the things that are out of my control until it was time to pick them up again.

I’ve picked all the stress back up again this week with a new listing and so far only a couple showings. I was cleaning today and feeling the anxiety of “What am I going to do?” creep back in my mind, when I heard Lauren start laughing. “Aaron said he put the yellow puff ball somewhere obvious before he left and here it is.” 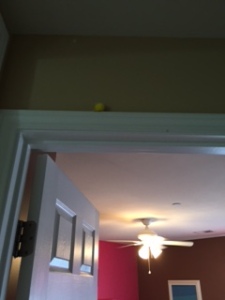 The yellow puff ball game started after Aaron’s high school graduation. His choir teacher gave it to the seniors. He promptly handed it to Lauren. “What do I want with this?” she said. “I don’t know what to do with it,” he said. And so the game began. They would hide the yellow puff ball thing in each other’s rooms. Lauren found it in her retainer kit once. I diverted Aaron’s attention on first year UVA move-in day so that Lauren could hide it discretely in his desk drawer. He told her he threw it away, and she was heartbroken that the game had supposedly ended until it showed up in her things after Thanksgiving. And so it goes on and on with the yellow puff ball game. I love that I had nothing to do with this game between brother and sister. It is their little way of keeping connected when they are so far apart. The yellow puff ball game made me not sweat the small stuff today.

How will this game ever end? Perhaps one day when I’m long gone, and they are both in their 90’s, one of them will have long forgotten about the yellow puff ball. But then it will suddenly appear, maybe in a denture cup or by a picture of the sibling who planted it.. its rolly eyes stirring a memory, bringing a smile and a much needed laugh to save the day.

This entry was posted in Uncategorized and tagged Family, gratitude, siblings. Bookmark the permalink.